Female empowerment in the FBF!

Posted on March 28, 2014 by pulsestrongertogether 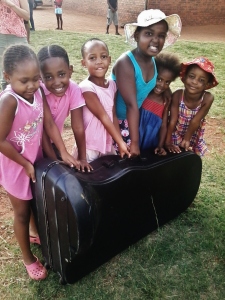 The Field Band Foundation is an organisation that wishes to empower girls and boys equally. This can be a challenge when the surrounding society and culture favours men. In South Africa females earn less than males, get less opportunity to participate in decision making and many experience sexual harassment, rape and domestic violence. A young Field Band member expresses her thoughts of growing up as a girl in Alexandra, a township in Johannesburg, South Africa:

“We play with many people and I got a lot of friends, but other people rape each other and so much violence is happening here. (…) Ya its different being a girl, in brass there is a lot of boys, if you are boy you enjoy life, girls you get pregnant. I don’t want to be a girl.” (Member, 10 years)

Clearly there is a need for females to see themselves as equal in South African society. FBF wants to contribute in empowering females so that they can see their possibilities and capabilities in life. One of the PULSE goals is to ‘help girls overcome these socio-cultural environmental barriers that prevent girls from exercising their rights to equal participation opportunities’.

Members of both genders need to feel that they are capable of playing and dancing in all sections of the band as well as their possibility to become leaders. This can be difficult when most of the Field Band Foundation’s tutor staff is male. Thus the role-models that the FBF members relate to on a daily basis are men. 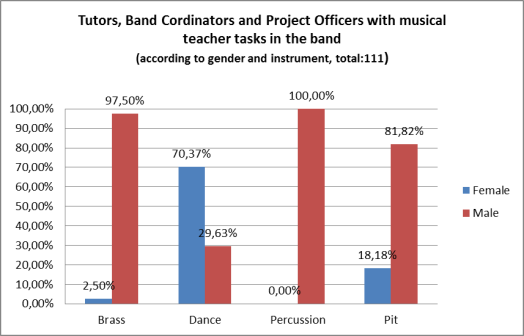 Moreover the different sections of the Field Band are clearly divided according to gender. Dance and Pit-Percussion (meaning steel-drums and marimbas) have a significant amount of female members, while the Brass and Percussion sections remain tremendously male-dominant. One tutor explains how difficult it is for girls to see their possibilities for playing instruments:

Despite the challenges these socio-cultural barriers entail, The Field Band Foundation has managed to reach and empower many female members. 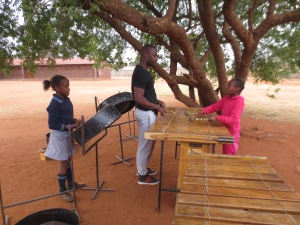 Some females have become leaders and played a part in changing attitudes towards women in the organisation. One former female BC expresses how she worked her way up despite negative attitudes towards her. Here she describes one of her successes, winning the National Championships with her band:

“I was the first female BC in the Field Band. The attitude I was met with was: “who are you and where do you come from, what are you gonna come up with? What are you gonna bring?” I walked into that, but I was determined to make it work. And I used to surprise everybody every year; “That is a work of a woman! That was a woman”. I was a woman and we still managed to pull it off” (former BC) 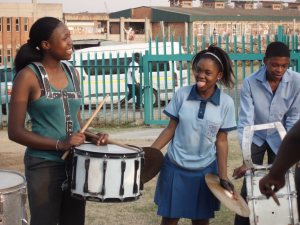 After joining the Field Band I learned to be serious and it improved my confidence. I was a kind of shy girl. I wouldn’t talk to people unless they talked to me first. Now I talk to people.” (Member, 15 years)

“I don’t like to be a leader at school because other children, they will bully and attack you if you try to have too many opinions about things. Here in  the Field Band it’s easy and I feel safe to teach and be a leader to other members. I had no friends before starting in the Field Band, now I have many (Member, 16 years).

“I have learned to be proud of being a girl. There are some girls who are afraid to dance in front of everyone and the boys, but we learn to be proud of ourselves and our bodies” (Member, 15 years). 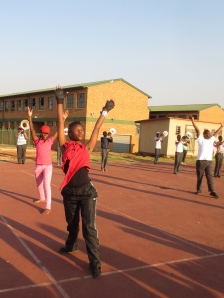 “I used to be a very shy person. When I came here I got to know everyone I was free to know anyone and became free to talk” (Member, 16 years).

“Being a TIT was nice because I got to be in front. I learned how to be a good leader. I developed my leadership skills, how to be patient with newcomers and how to control people” (Member, 16 years).

This shows that when the Field Band works to its full potential, females are seen, heard and given a space where they can feel empowered. Some female members say they have dreams and ambitions of a higher education, job and future outside the realm of the FBF. Hence there might be a possibility that females look for jobs and opportunities elsewhere and actually are more successful than males in getting work beyond the scope of the organisation. Nonetheless PULSE and the FBF wishes to continue the work with female empowerment. Hopefully a teenage-girl workshop is right around the corner.

1 Response to Female empowerment in the FBF!