Posted on November 21, 2014 by pulsestrongertogether

Emmanuel Rattle is a man that knows how to express himself, a man with big dreams and ambitions, and also a man that puts his plans into action. This active, young man started his career in the Field Band Foundation (FBF) at an early age. First as a dancer, later as a dance teacher and choreographer. Now you will find the always smiling man at work in the reception in FBF´s head office in Johannesburg.

Emmanuel knows how it is to be different, and what it’s like to struggle to achieve goals. Maybe that is why his heart is wide open for everyone that needs some help to reach their ambitions and hopes. Maybe that is why he spends long extra hours trying to fulfill young people´s dreams. Emmanuel claims that some young people are lacking guidance and support. “They need someone that can go out there and get resources for them and help them with funding. Many parents don´t have the knowledge and possibility to go on the Internet and do research for things like that, so the least I could do is to accompany them and give them information” (Emmanuel).

Emmanuel´s eagerness and engagement has had effects and results – great results. By Emmanuel’s help several FBF-students have got scholarships and sponsors and attended university. Two young talented dancers from the FBF got accepted at the National School of Arts, thanks to Emmanuel. Emmanuel´s eyes get filled with tears when he speaks about the young girls. “I never got the opportunity to go to university, I never got the opportunity to study full time dance, so I want to give others a change to actually get a degree. I see a need in that. I know how it feels to not having relevant papers to apply for certain things. I know that the FBF huge difference in so many peoples life, so I can not give it up and say that, there has been so many changes so I can only relax, because this foundation empowers the young people in South Africa and It has to continue to do so” (Emmanuel).

Emmanuel is proud of what he has accomplished and the differences he has contributed to in the FBF and in individuals’ life. In addition to helping others and working at the FBF head office, Emmanuel is creating his own shows and events. The journey to where he is now has however not always been an easy one. “I will not forget the pain I have been going through”, he says. As other gays in South Africa Emmanuel has experienced a lot of discrimination, but he has never given up. He is grateful to the FBF that he sees as an open and inclusive arena. Emmanuel describes the FBF as a powerful and strong project that creates acceptance for and understanding about gender and sexual equality through educating the members. “We must remember that the most important work the Field Band does is teaching life skills through the medium of the music and the dance”. (Emmanuel). 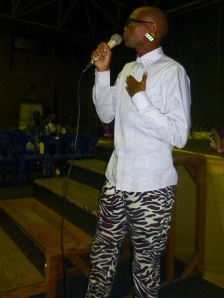 To shed a light on people that has been forced to walk too much in the darkness has been of great significance for Emmanuel for many years. On the first of November 2014 it was the gay community in Alexandra´s time to shine. Emmanuel conducted Miss Gay Alexandra, a beauty competition for gays.

“ From the moment I came to Alex in 2007 I wanted to make a Miss Gay Alex event, but I was so busy all the time, so I never had the energy to implement the idea and make it happen, but I saw the need for it. Not just as a beauty contest, but as a way to empower and educate other people about gay people. “ (Emmanuel). Emmanuel knows that too many gays in South Africa have been suffering from hate crime and homophobic attacks. He believes that through something entertaining and positive as the Miss Gay Alex event you can reach out to and educate a lot of people. Emmanuel hopes that everyone that attended the Miss Gay Alex event now can say: You know what, we have been wrong, the gays are people just like we are. Let’s try to make a difference, let’s try to unite.

Emmanuel think time is ready to make a change. He feels that the general opinion about the gay people is developing, but there are still ways to go to achieve full equality and understanding for all. At the Miss Gay Alex event Emmanuel mentioned the death of a gay friend. Guys followed him and his genitals was cut of and stuffed in his mouth, simple because of his sexual orientation, simple because of him being gay. “It is those things that we are still trying to fight, not physically, but through words and by educating the community through events like Miss Gay Alexandra. One’s emotional bitterness from the past does not have to be taken out on others, we can focus on the positive.” (Emmanuel).

Emmanuel is a role model, an honest, hardworking man with a big heart and many dreams. One of them is that the Miss Gay Alexandra event can grow bigger and bigger, and that sponsors and others really can open their eyes for how important and developing his project is.

We wish Emmanuel all the best of luck!

You can read more about Emmanuel’s work in this blog post: