Posted on November 17, 2017 by pulsestrongertogether

On 24 October 2017, PULSE had a chance to perform with Furuset Skoles Musikkorps in Oslo on the United Nations Day. The day was to celebrate all the hard work the United Nations (UN) does to change lives and solve global problems. This was a great experience for the PULSE team, as it was our first performance in Oslo. 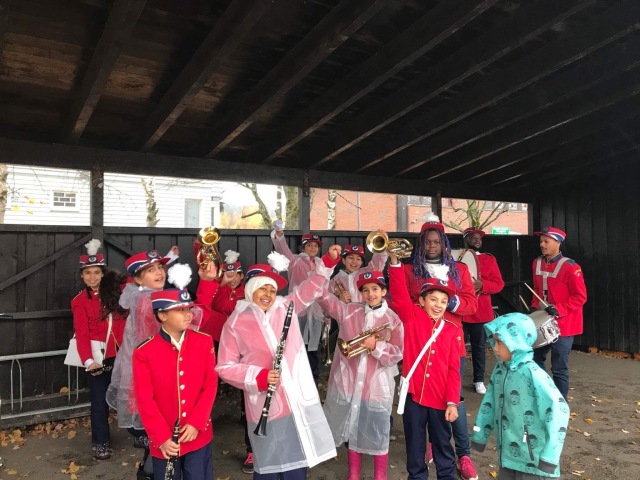 The PULSE team contributed to the performance by playing drums with the band. This inspired more children and it ended up being part of a new recruitment strategy. Surprisingly, after the UN day performance, the percussion section in Furuset Skoles Musikkorps went from having one member at our first rehearsal to three members. In our third session, we had seven new members in percussion! The performance was not meant to be about recruitment, but we think children were encouraged to be part of the band because of the way we were performing. We were using standard Field Band Foundation (FBF) methods. This means dancing while playing and having fun all at the same time.

After the UN performance, Furuset Skoles Musikkorps is now willing to test this particular FBF model as part of their beginner training. New members in the band will learn basic rhythms on drums before they move to another instrument. To prepare for beginners in Furuset Skoles Musikkorps, we have developed a drum solo together with Jaran Lienig, a former Bands Crossing Borders exchange participant and drum kit player from Norway. Jaran also had a hand in putting together our body percussion challenge that we will use mostly with beginners as part of the recruitment process in the school band. We are very enthusiastic and are hoping that many more children will join after we have done the actual recruitment. The start is very promising!

PULSE is contributing towards recruitment in Norwegian school bands because one of our goals is to improve the imbalance of the past. The imbalance was that most of the children who are not in banding activities comes from low income groups. PULSE will continue to work more on inclusion to include children from minority backgrounds, both musicians and non-musicians, as the year goes on.