Posted on April 18, 2016 by pulsestrongertogether 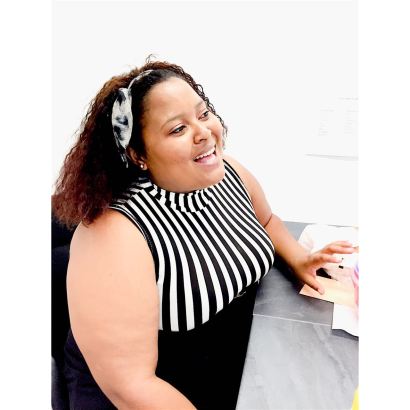 When Nomkhosi Mnisi was 12 years old, she witnessed her first Field Band performance. At the time she didn’t know what the Field Band Foundation was, but she knew she liked it. A week later she recognised the same t-shirts at her school in Soweto, and she joined the brass section in the brand new field band in Soweto.

Nomkhosi quickly became one of the best players in the brass section and it didn’t take long before this was recognized and she started getting solos in the band.
“I was so happy! It made me believe in the power of achievement and that I could do this. It boosted my self confidence, it boosted a lot of self confidence.“

Even though she excelled on the trumpet, Nomkhosi’s trumpet career was short and sweet. After playing the trumpet for only two years, she switched to the pit section. She felt all the music started in the pit section, so she liked it a lot. Nomkhosi kept to the pit section, and after being a part of the Field Band Foundation’s Tutor in Training program where members get trained to become tutors, she became a pit tutor in the Witbank field band. 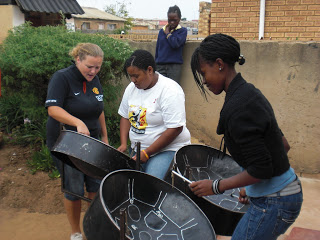 Nomkhosi as a Tutor in Training in Dobsonville. (Photo: Ragnhild Sandbakk)

But since Nomkhosi still wanted to learn more about music in order to become a better musician and tutor, she applied for the Field Band Academy in 2010. Because she already had worked as a tutor for a year prior to this, everyone at the Academy expected her to live up to the standard of being a tutor. That brought some pressure upon her, but Nomkhosi remembers this as one of the things that made her work harder. It seems the hard work paid off, because when Nomkhosi graduated in 2011 and went back as a tutor in her previous field band it only took half a year before she was elected “Woman of the year” in the Field Band Foundation. Normally this recognition is given to people within the organisation working at Head Office or Band Coordinators who have been in the Field Band Foundation for a long time. “I was the first tutor to get this recognition, and I was shocked and honoured,” she says.

And Nomkhosi’s journey didn’t end there! In 2012 she was chosen to participate in an exchange program between the Norwegian Band Federation (NMF) and the FBF and travelled across the world all the way to Norway.
“It wasn’t easy, but I learned a lot from it. All the times I wondered in the back of my mind if I was gonna get through this, I did get through it. I think what helped me was all the tools I got at the Field Band Academy. I went to Norway with a goal of becoming a better musician, but while I was there it changed. That’s when I found my “me”. I learned that there were a lot of things I could do also besides playing, that I had more skills than I knew.”

Nomkhosi returned from Norway with a lot of new experiences in her suitcase. She remembers one moment especially well, and says the realisation this brought to her is one of the reasons she’s still in the Field Band.
“I was just playing music with this kid, and I didn’t think too much about it. And then he told me he felt like the luckiest boy in the world right now because we were playing together. That was the moment I realised that the work we do is important, and it can mean so much for the children and youth we work with.”

After working as a Band Coordinator in Free State for a while, Nomkhosi applied for a position as a Facilitator in Training at the Field Band Academy. She felt she would be able to reach out to more people through getting involved at the Academy again. She got accepted to the program, and after being a Facilitator in Training for a year she moved on to becoming a Junior Facilitator. And now – less than one year later- she is working at The Field Band Foundation’s Head Office in Johannesburg, as Education Administrator.